The Marines have long relied on two types of
recoilless rifles to provide the heavier firepower when needed.

M40
106mm Recoilless Rifle.   Considered to
be Brigade assets in PMC service (2 per brigade/3 brigades). Designed largely as
an antitank weapon, the M40 was developed during the Korean War as the T170E1
and standardized in 1953. It requires a two-man crew and had a range of up to
1,372 meters and has a rate of fire of about 5 rounds per minute.

While normally mounted on an M151 "Kennedy Jeep"
in Philippine service, it can also be fired from a tripod or fitted to M113 APCs.
May eventually find its way onto the newer HMVVs as the M151s become
unsupportable, though these most of these jeeps themselves have already been re-engined
with diesel engines.  The weapon is about 11 feet long and weighs about 250
pounds, exclusive of tripod. While the M40 is now outclassed by guided missiles,
it is nevertheless cheap and effective and is in service with many armies around
the world.  With armor piercing ammunition, it can penetrate up to 620mm of
rolled homogenous armor at 0º, 515mm at 30º, 400mm armor at 60º.

In Philippine service, the M40 is used to take
out bunkers, fortifications or even whole buildings if required – a task to
which it is very well suited. As a direct support weapon, it has few equals both
in terms of cost or effectiveness in this task.  For this reason, the Philippine
Marines would like to acquire more as funding permits though because it is no
longer used by the US.  Ammunition is supplied from US as well as other
sources. 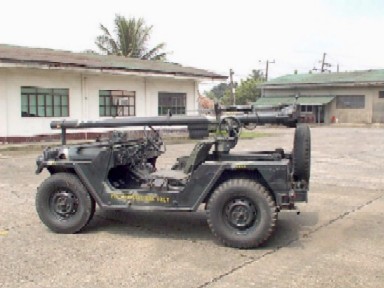 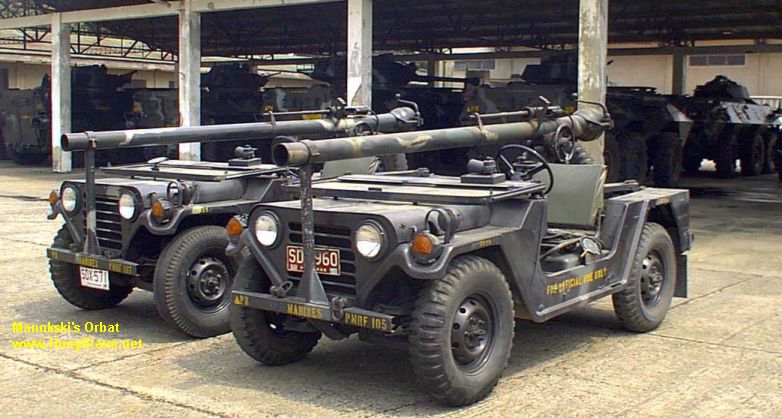 M67 90mm recoilless rifle.
The other standard Philippine anti-armor/company fire support weapon.  Normally
issued at the company level.  It weighs 35 lbs and is 53" long.  It is an
air-cooled, single shot, breech loaded direct fire weapon that fires a 9 1/4 lb.
HEAT (High Explosive Anti-Tank) shell or a high explosive shell.  Maximum
effective range is 400 meters. It can be fired from the ground or from the
shoulder.  The sight with a reticle pattern graduated from 0 to 800 m. is
visible on top of the tube.   The weapon is longer used by US forces but was
acquired from US surplus stocks.