Philippine Air Force air power, circa April 1997,
Cotabato Airport.  OV-10, UH-1H with a Simba APC in the background. Note
that the OV-10 has no external stores on its pylons but carries a large external
tank – standard store for all PAF OV-10s.  The Simba was assigned for
perimiter security.

With thanks to E. Alvia for the photos. Sorry
no tail number info for the plane spotters out there.  Ed.

OV-10 taken at Mactan Air Base in 2002.
Note the three bladed propeller.  OV-10 propellers are "handed", ie they
rotate in opposite directions to eliminate torque.  A detail which pilots
say is one of the things that makes the OV-10 a delight to fly, though the
OV-10As remain underpowered.  I am told that among the benefits of the
switch to modern modern propellers is the improved flight characteristics and
throttle response.

The first two OV-10s to come out of the
PAFs
Service Life Extension Program.  These OV-10s are immaculate!

Both these aircraft were originally operated by
the USAF and were delivered to the PAF in 91/92. The aircraft on the left, 67-14610,
was initially operated by the 549th Tactical Air Support Squadron, Patrick AFB, FL (c. 1987).
The aircraft on the right, 68-3830,was originally assigned to the 27th Tactical Air Support Squadron, George AFB, CA (c. 1987)
prior to being transferred to the PAF. Note that 830 carries a different pod in
the centerline.

Thank you to the Philippine Air Force for the
very nice photos.

Side view of 68-3830.  Note the
S-76 in the background. This type is also benefiting from
the increased funding and has seen an improvement in availability.

Close up of 20mm gun pod 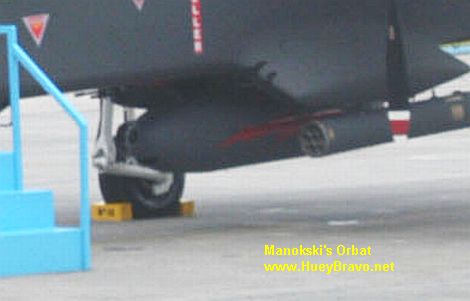