INVITATION TO APPLY FOR
ELIGIBILITY AND TO BID

The Armed Forces of the Philippines invites
all interested parties to apply for eligibility and to bid for the shipment of
two (2) Patrol Killer Medium (PKM) Wildcat gunboats of the Philippine Navy from
Chinhae Naval Base, Jinhae, Busan, South Korea to Manila South Harbor Anchorage
Area, Manila, Philippines. It has an approved budget of NINETEEN MILLION TWO
HUNDRED FIFTY THOUSAND PESOS (Php 19,250,000.00), chargeable against the AFP
Modernization Program CY 2002 Funds.

Interested Bidders may obtain
further information from the AFP Bids and Awards Committee Secretariat and
inspect the bid documents at the above address from June 17 untIl June 30,
2005 from 8:00 a.m. to 5:00 p.m.

A complete set of bid documents
may be purchased at the above address and upon payment of a nonrefundable fee of
Two Thousand Pesos (P2,000.00). The mode of payment will be through
cash/cashier’s check in favor of the AFP Modernization Act Trust Fund. The
bid documents shall be received personally by the prospective bidder or his
authorized representative. Representatives, however, are required to present a
Special Power of Attorney (SPA) issued by the prospective bidder before the bid
documents are released and before any other transactions in connection therewith
is entertained.

Interested bidders shall be
allowed to inspect the two (2) PKM Gunboats at the Chinhae Naval Base, Jinhae,
Busan, South Korea upon purchase of bid documents until the deadline of
submission of bids.

The AFP will hold a Pre-bid
Conference to all interested parties on June 30, 2005 at 9:00a.m., at the
Silid Panday Pira, 1/F Bulwagang Mabini, Camp Aguinaldo Emilio Aguinaldo, Quezon
City.

The deadline for the submission
of bids shall be at 8:30 a.m. of July 18,2005. All bids must be
accompanied with a Bid Security in any of the acceptable forms and its
corresponding amount as prescribed in Section II of the bid documents, 118. Late
bids shall not be accepted. Bid opening shall immediately follow at exactly
9:00a.m. in the presence of the bidders, or their representatives, who choose to
attend the proceedings at Silid Panday Pira, 1/F Bulwagang Mabini, Camp General
Emilio Aguinaldo, Quezon City together with some of the observers who will be
invited.

The AFP reserves the right to
accept or reject any bid, annul the bidding process, or reject all bids at any
time before the contract is awarded, without incurring any liability to the
affected bidder or bidders.

INVITATION TO APPLY FOR ELIGIBILITY AND TO BID

1.   The Department of
National Defense
(Armed Forces of the Philippines)
Through the
General Appropriations Act
and
AFP Modernization Act
Trust Fund
Intends to apply the sum of
FOUR HUNDRED FORTY SEVEN MILLION THREE HUNDRED SIXTY THOUSAND
PESOS (PhP
447,360,000.00) being the
Approved Budget for the Contract
(ABC) to payment under the
contract for the Supply and Installation of the
AFP Fixed Communication System (FCS)
Project
(AFPMP-GHQ-09-001 -04). Bids received In excess of the ABC shall be
automatically rejected at Bid opening.

2.   The DND/AFP now invites
Bids from eligible Bidders for the Supply and Installation
(Engineering, Furnishing,
Installing and Testing
(EFIT] and
Commissioning)
of the
Visayas-Bicol Communications
System (VBCS)
and Mindanao
Microwave Communications System
(MMCS). Delivery of the GOODS is
required within Two Hundred Forty (240) days upon issuance of Notice to Proceed.
The following parties may participate: Sole proprietorships, partnerships,
corporations, cooperatives, or combinations of any or all the above entities
forming themselves into a joint venture to meet the eligibility requirements of
the project and to undertake the project provided that they themselves are
manufacturers and/or system integrators.

3.   Bidding will be conducted
through a
Two-Stage open
competitive bidding procedures using non-discretionary pass/fail criteria as
specified in the
Implementing Rules and Regulations Part A (IRR-A) of Republic Act
9184 (R.A.
9184), otherwise known as the
“Government Procurement Reform Act,”
and is restricted to:

Filipino citizens/sole
proprietorships, organizations with at least sixty percent (60%) interest or
outstanding capital stock belonging to citizens of the Philippines,
and/or to
citizens or
organizations of a country the laws or regulations of which grant similar rights
or privileges to Filipino citizens, pursuant to Republic Act 5183 (R.A. 5183)
and subject to Commonwealth Act 138 (C.A. 138). Only Bids from Bidders who pass
the eligibility, check will be opened. The process for the eligibility check is
described in Part II of the Bidding Documents, ITB. The bidder with the
Lowest Calculated Bid
(LCB) shall
advance to the post-qualification stage In order to finally determine
responsiveness of the bid to technical and financial requirements of the
project. The contract shall then be awarded to the
Lowest Calculated and Responsive
Bidder (LCRB)
who was determined as such during the post-qualification procedure.

4.   Interested Bidders may
obtain further information from the
DND BAC Secretariat, AFP
Modernization Project Management Office
and inspect the Bidding
Documents at the address given below from 8:00 a.m. to 5:00 p.m.

5.   A complete set of Bidding
Documents may be purchased by interested Bidders from the address below, upon
payment of a nonrefundable fee in the amount of
Forty Thousand Pesos
(Php 40,000.00). The
method of payment will be in the form of cash or cashiers check. The Bidding
Documents shall be received personally. by the prospective Bidder or his
authorized representative.

7.   Bids and eligibility
requirements must be delivered to the address below on or before August 25, 2005
at: 9:00 a.m. Late Bids shall not be accepted.

8.   Bid opening shall be on
August 25, 2005 at 9:00 a.m. at
Silid Panday Pira, 1st FIr,
Bulwagang Mabini, Camp General Emilio Aguinaldo, Quezon City.
Bids will be opened in the
presence of the Bidders representatives who choose to attend at the address
below.

9.   Registered bidders shall be
required to visit and/or conduct survey on the proposed project sites starting
on 15 July 2005.

10. To facilitate eligibility
checking, manufacturers and/or system integrators who wish to participate in the
public bidding are required to apply for registration with the DND BAC, through
the DND BAC Secretariat at least fifteen (15) days prior to the scheduled
submission and opening of bids for the procurement projects they wish to
participate in, pursuant to DND BAC Cir 01-2005 dtd 12 May

11. The DND BAC reserves the
right to accept or reject any Bid, to annul the and to reject all Bids at any
time prior to contract award, without thereby incurring any liability to the
affected Bidder or Bidders. 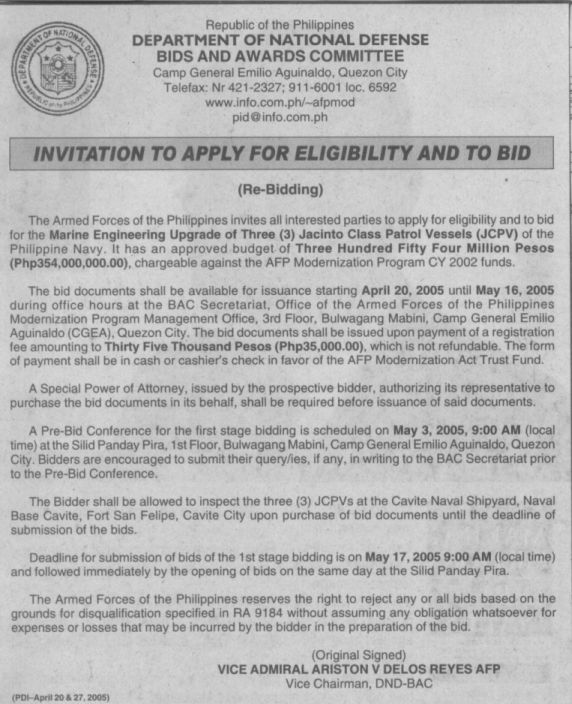 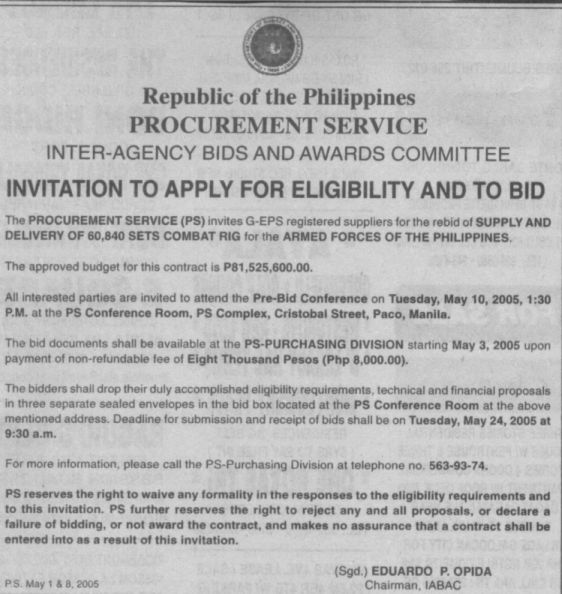